How do viruses spread through food or water?

Everyday we need clean food and water to stay alive and healthy. Unfortunately, not everywhere in the world can food and water be stored or prepared safely. In warm environments food and drinking water can turn bad very quickly, giving viruses the change to spread.

In many cases we ourselves are the cause of food- and waterborne virus infections. Food- and waterborne viruses are located in our gut. This means they also come out with our poop. When you don’t wash your hands properly after going to the bathroom, you risk infecting yourself when you bring your hands in contact with your mouth. Or you transmit the virus to someone else when you shake their hands for instance or come in contact with food. 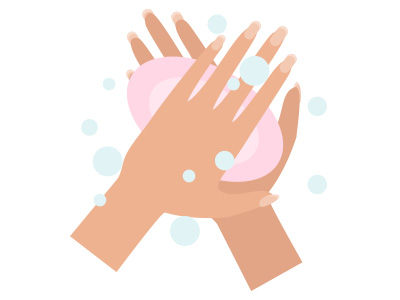 Which viruses are transmitted by food and water?

Noro, Polio and Hepatitis A are some of the most common viruses transmitted by food and water. Polio is highly contagious and although most people won’t get any or light symptoms when infected, 5%-10% of infected people get very severe symptoms. The spinal cord and brainstem become inflamed, causing paralysis, brain damage and sometimes even death – yikes!

Hepatitis A affects the liver, but generally has less severe symptoms than its siblings Hepatitis B and C. Hepatitis A often goes by with mild flu like symptoms, but some people are affected by jaundice. This has the eerie effect of turning your skin and the whites of your eyes slightly yellow for a while.

There are many more food- and waterborne viruses and bacteria, all of which come with a mixture of diarrhea, vomiting and other unpleasant symptoms when you get infected.

Preventing infection with food- and waterborne diseases has everything to do with hygiene. Always wash your hands before and after preparing or eating food and going to the bathroom.

When it comes to preparing food: separate meat, eggs, poultry and fish from other foods, this prevents so called cross-contamination. Don’t forget to always boil your water and make sure your food is cooked through and through – you don’t want to see any pinky bits in your meat!

Against polio and Hepatitis A there are vaccines available. Many children all over the world are vaccinated against polio when they’re little. Getting a vaccine shot against Hepatitis A protects you for around 20 years.

For most of the other food- and waterborne viruses there are no vaccines and like many other virus infections, you just have to battle through them. Keep to bed and drink enough clean water is the main advice.